Sojourn to the Past 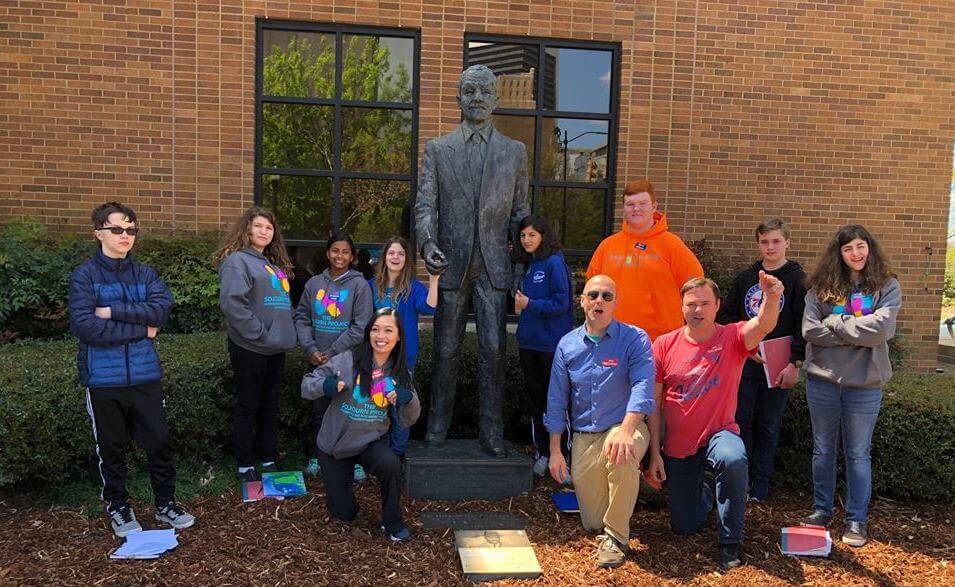 Are you aware of the bravery of the Little Rock Nine?
Or the resilience of the Montgomery Bus Boycott?
Or the daring of the Children’s Crusade of 1963?
Or the tragedy at the 16th Street Baptist Church?

A little online research will grant you the facts on these historic happenings. But students at Sand Hill relived these events by reaching into the past and discovering answers from the ultimate source–the people who survived them.  For eight extraordinary days, a group of middle school students traveled through five states in the south on a life-changing adventure. Tracing the Civil Rights Movement, they faced a rigorous curriculum that came to life with historic sites, tragic events, courageous acts, and remarkable personalities.

Sojourn to the Past exemplifies the true meaning of experiential learning. We were all in it together: adults learning alongside their students, who demonstrated maturity and resilience that is beyond their years.

Because it would be impossible to describe all that we learned, and the experience was so authentic and so meaningful on a personal level, I’ve decided to share my top five moments from the trip: 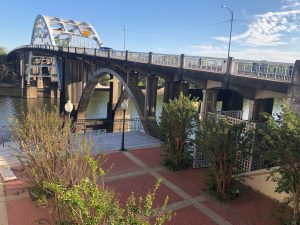 March 7, 1965 is considered ‘Bloody Sunday’ in Selma, Alabama—the day Alabama police confronted peaceful protestors with violence and teargas, sparking the Selma to Montgomery March that led to voting rights for all. Seeing the bridge in person was remarkable. But walking across the bridge together was priceless. We lined up by twos and took on the role of John Lewis or Hosea Williams, the men who were at the front of the  dangerous march. As whispers of “We shall overcome,” echoed off the steel beams and into the water one hundred feet below, we strolled together in unity.  The experience was empowering in a way that went far beyond traditional learning.

While sharing a lifetime of inspirational accounts, Congressman Lewis spoke to us about his endless journey towards freedom. Having been arrested at least 45 times, there was empathetic laughter when he said, “Yes, I got into trouble. But it was good trouble.” At the end of his speech, we were given the opportunity to thank him by sharing a word that best describes his character. I stood up and told him he was ‘transcendent’ because his words were passing the torch to our youth in the struggle for equity and freedom.  I will always remember the grateful look in his eyes as he sighed and pumped his heart with his fist to acknowledge the connection we shared in that moment. 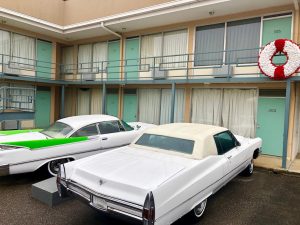 On the last day of the trip, we visited the Lorraine Hotel in Memphis, Tennessee, the site where Martin Luther King, Jr. was assassinated. Now a museum, the hotel has been preserved to capture that tragic moment in time.  We gazed through the 1960’s decor out the hotel window at the balcony where MLK spent his last seconds, gazing up at the building where James Earl Ray waited for him for so many hours. Later, we watched a short film that showed a conversation Coretta Scott King and their daughter Bernice had the day after the shooting. I couldn’t hold back my tears when his daughter spoke with courage at how her daddy would want them all to forgive the killer and carry on his vision of nonviolence.

#2: My conversation with Minnijean Brown-Trickey.

I was lucky enough to spend several hours after curfew chatting with Minnijean Brown-Trickey of the Little Rock Nine. She shared her memories and profound wisdom deep into the night.  Minnijean spoke freely of the abuse and cruelty she endured at Central High School in Little Rock, Arkansas in 1957. She reflected on the strategies she used to defend herself that ultimately got her suspended and expelled. Her eyes got brighter and a smile appeared on the corner of her lips when she explained her favorite memory: the feeling of empowerment she gained from having an armed guard escort her to class. My eyes welled with tears when she disclosed that the same guard contacted her a few years back and told her that he still has a ‘thank you’ note she had slipped to him so many years ago. Throughout the conversation, it felt as if I were being granted a window into history. 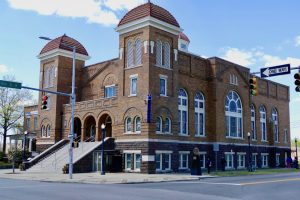 #1: Inside the 16th Street Baptist Church.

On September 15, 1963, four members of the Ku Klux Klan planted dynamite under the steps of the 16th Street Baptist Church in Birmingham, Alabama. Tragically, four little girls from the ages of 11 to 14 were killed when the bomb exploded later that morning. The experience was surreal. We looked into the stained-glass windows that had shattered so many lives. As if transported back in time, we sat in the pews of the historic church as two of the sisters of the victims shared with us their stories from that day. Sarah Collins was in the dressing room with her friends and sister when the explosion occurred. She described the moment of impact.  She had 21 pieces of glass embedded in her face and remains blind in one eye. Ultimately, we sang together a hymn of healing and hope, honoring the heroic young ladies. As tears again streamed down my face and chills ran down the back of my neck, I realized that this was the most powerful history lesson I’d ever witnessed.

Although those were the memories that most impacted me, it’s clear that everyone on the trip experienced his or her own life-altering moments. An up-close and personal glimpse into the Civil Rights Movement not only reshaped the way our students think about history, but also challenged them to discover new depths of perspective-taking and self-reflection, kindling the courage to stand up for their own beliefs and values.